This year has been marred by many tragic plane and helicopter crashes in remoter areas of Canada, the most notable being First Air’s 737 in Resolute which killed twelve and injured three, and Arctic Sunwest’s Twin Otter Float-plane that crashed in the centre of Yellowknife killing its crew of two and injuring seven passengers.

These are just two of several fatal accidents that reached national headlines but of course there have been others, some less serious, including my own, which occurred as I was flying workers and supplies into a remote mining strip. Although my passengers and I were badly shaken, there were no serious injuries and we were all able to walk away from the crumpled and partially submerged wreck of the small, fixed-wing plane. It was a humbling and life changing experience.

Later, my employer calmly told me that my accident was actually “the fourteenth wreck at that particular airstrip.” He knew exactly what conflicting emotions I was feeling, but “stuff happens” and like many well seasoned bush pilots (and I consider him one of the very best) he had “been there – done that.” Given the fact that this rather nasty airstrip is currently in the epicentre of a rather frantic new gold rush, it may be only a matter of time before wreck number fifteen occurs and its victims may not be as lucky.

What drives pilots to work in such dangerous environments? In the bush plane world it is definitely not the high salary since this type of flying often pays no more than an average blue-collar trade in Canada (although helicopter pilots usually fare better).

In the very long days of the very short northern summer, pilots can find themselves on duty for 14 hours a day, often in far less than ideal conditions. Much of a pilot’s time is not spent in the air – they are usually loading and unloading aircraft, cleaning and refuelling them and at the end of the day they will spend what can be several hours completing what seems like volumes of mandatory paperwork. Fitting in a healthy meal and getting 8 hours sleep are real challenges.

Yet, there are career bush pilots who thrive in these conditions. They find the challenges, the risk management, the camaraderie and self-sufficiency are exciting and enjoyable. These people are the true professionals and the backbone of the industry, but even so, few of them are immune to lapses in judgement when subjected to strong commercial pressures. They are only human after all.

Young, aspiring airline pilots are often lured into the bush with memories of heroic bush pilot adventures they have read and the promise of those invaluable flying hours they will need to land a job in the more lucrative and safer right seat of a 737. They find themselves on a very steep learning curve requiring close mentorship and many leave to fly more complex aircraft as soon as the opportunity arises. I know that, when I fly as a commercial passenger, I would much rather be sitting in that 737 knowing that the pilot at the controls had served his time in the bush, rather than someone straight out of aviation college.

I enjoy working in the bush. It allows me to experience parts of the world others seldom see. Wilderness flying is pure adventure and I do it because I love it. The fact that, in the course of this work I also meet some wonderful, interesting people, is a bonus.

Unfortunately, there are operational realities that make this one of the most hazardous occupations in North America. To start with, bush strips are often miles from the nearest road. It takes little more than a chain saw and a bulldozer and then you are open for business. There is no safety net of air-traffic controllers or emergency vehicles with crews waiting to roar down the runway and cover crashed air planes with fire suppressing foam. Often, in the mad rush to stake claims and mobilise crews, these small airstrips gradually become surrounded by oceans of fuel drums, supplies and make-shift camps, as well as the usual inquisitive and unwelcome wildlife – all creating serious hazards to arriving and departing aircraft.

Weather is frequently a factor in accidents. In Northern Canada, weather reporting facilities are scarce and, in truth, many experienced pilots quite rightly pay less attention to forecasts and rely more on personal observations and interpretations.

As long as we continue to extract resources from remote areas, bush pilots will be needed. Wilderness flying will never be as safe as scheduled air transportation. Most people willing to go into the bush, whether as pilot or passenger, know that it is an adventure and as such has risks and benefits. Everyone involved should be well aware of those risks and weigh them carefully.

Bush operations could, and should, be made safer. Satellite tracking technology – which effectively narrows a search for a missing aircraft down to a small area – is now affordable even for small charter companies and it seems just common sense that aircraft operating in remote areas should be fitted with these devices. Perhaps it’s time to make them mandatory. Canadian pilots are allowed to work much longer hours than pilots in the US or Europe and fatigue undoubtedly contributes to some accidents. So why do we allow such long hours? Why are dangerous environmental conditions allowed to develop at busy bush airstrips?

Flight safety is a collective responsibility with the pilot at the “sharp end.” Only when all stakeholders – pilots, operators, clients, passengers and regulators stop to consider why we do things the way we do and start tackling some of the issues will these risks diminish.

So remember, the next time you hear the term “pilot error” quoted as the “cause” of an aviation accident, be aware that the pilot was probably just the final link in a very long and over-stretched chain of decisions, over-expectations, necessities and under-regulated work environments.

Barrels and parked aircraft line the edge of this busy mountain strip, creating a serious hazard.

This Spring I was fortunate to spend several fascinating days working in the northern Yukon community of Old Crow, about 100 miles south of the Arctic Ocean. Nearly 100 years ago, the Vuntut Gwich’in people lived a nomadic existence heavily dependent on the Porcupine Caribou herd in the Northern Yukon and Alaska. As “civilisation” took hold of the Arctic, the Vuntut Gwich’in were forced into a permanent settlement along the banks of the Porcupine River.

About 300 people live in that community, now known as Old Crow. There are no roads within 100 miles and access is by air, or by boat along the Porcupine River, which meets the Yukon River downstream in Alaska.

Vuntut Gwich’in life has been heavily and and at times forcibly diluted by western culture – they have endured residential schools (where children were forcibly removed from the community to be educated in western ways), alcohol and disease.

Somehow they have managed to retain some of their old ways and hunting and gathering still plays a major part in their lives. They still depend on the land for their existence. Obviously this is a choice as they could default to western culture for their daily needs if they so wished (and no doubt a few do).

When I arrived, the ice on the Porcupine River was weak and fractured after a week or two of warm weather. The break-up is a pivotal point in the Vuntut Gwich’in year and bets were on as to the day the river would become free of ice. These were days of celebration – soon they would be off hunting as the Porcupine Caribou herd heads northwards towards the North Slope as it has done for thousands of years. Even for those with regular jobs, taking time off for the hunt seems accepted as a birth-right.

What seemed remarkable, is their integration of modern and ancient. Their lives are not “either/or”. Traditional living is part of school curriculum and there is a drive to keep their language and culture alive.

Transportation is important – the fact that the Vuntut Gwich’in own a 49% share in Air North, the Yukon’s airline, is significant, and so is high speed Internet, snow mobiles and the other staples of modern life. I was also surprised to see a couple of modern community buildings decked with photo voltaic panels – set almost vertical to catch the low arctic sun.

Those I met were bright and friendly and they seem to age extraordinarily well. As a colleague who had lived and worked in the community for 11 years remarked, “They hadn’t seen a vegetable in the community until about 40 years ago.” Their diet was, and still largely is, meat, fish and berries and they seem to thrive on it. I was shocked to find that I had underestimated the ages of several individuals by 20 years.

Interestingly they have embraced aspects of our culture. They love playing the fiddle and square dancing – as I discovered during their “Cariboo Days” celebrations.

I don’t wish to romanticise life in this rare community, as it has its problems like anywhere else. As they have learned from us, I think we have a lot to learn from them. As I departed after four wonderful days in Old Crow I couldn’t help but wish them well.

To see David’s photographs of the Yukon…. 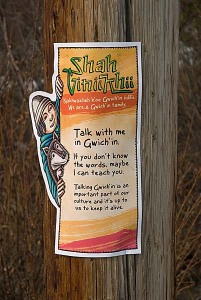 Encouraging kids to learn the language and live the culture.